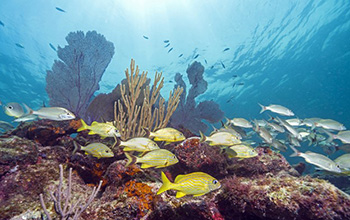 Australian researchers recently reported a sharp decline in the abundance of coral along the Great Barrier Reef. Scientists are seeing similar declines in coral colonies throughout the world, including reefs off Hawaii, the Florida Keys and in the Indo-Pacific region.

The widespread decline is fueled in part by climate-driven heat waves that are warming the world's oceans and leading to coral bleaching, the breakdown of the mutually beneficial relationship between corals and their resident algae.

But other factors are contributing to the decline of reefs, including pollution and overfishing.

According to a U.S. National Science Foundation-funded study published in the journal Science, the key to coral reefs surviving climate-driven heatwaves and subsequent bleaching is managing global climate change -- and local conditions.

Two local issues that can have a large effect on the health of coral reefs are nutrient pollution and overfishing. Overfishing depletes the number of fish that eat algae and keep a reef's ecosystem in balance. For example, depleting the number of herbivorous fish can lead to an overabundance of macroalgae, which can indicate a stressed ecosystem.